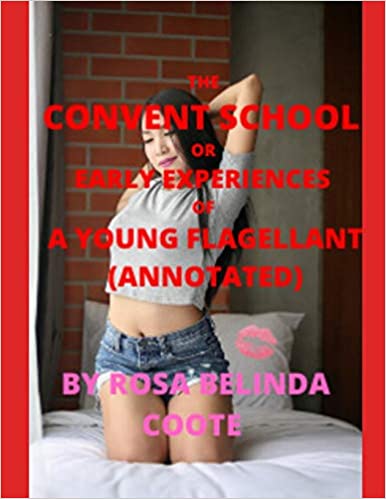 THIS IS A ANNOTATED VERSION OF THE ORIGINAL BOOK. WE HAD TRIED TO ADD HANDY SUMMARY AT THE END OF THIS BOOK. THIS BOOK IS STRICTLY FOR ADULTS.

The Brief Summary of the book is as follows:-His hand was passed under my bottom, between my legs, and as I covered my face with my hands, I could feel his fingers invade every secret spot in turn, even to forcing a digit up the fundamental orifice, which is always so tight and difficult of entrance, saying, as he did so: “Did you let him go there, or has your husband ever sodomised your bum-hole.

My agony was so intense that I could only gasp and sigh, strength I had none, he seemed beside himself with rage, but at last dropped his scourge, and throwing open his frock in front I could feel his rampant pego thrusting towards my mount, and am sure he spent on my drawers outside before he could get into me; this he soon effected, and taking my buttocks up in his strong embrace, he loved furiously, swaying me about with my arms still tied up by the rope; but I forgot all that, his motions within me took away all feeling of pain, and I believe much as I loathed him and felt humiliated by all his dreadful treatment that I actually spent copiously when I felt his hot sperm shooting into and soothing my overheated cunt.

They kept me in the same chamber, where I had been so outraged, the two nuns nursing,—bathing my bruises, and using soothing injections to allay the inflammations of my privates, till, on the third day, they said I was so far recovered that my Confessors might finish the prescribed penance, adding, with a malicious smile, “we saw everything last time, and so we shall now, through our peepholes; how delicious the sight was last time, and we had such frigging and dildo banged after it was all over. I was almost too far gone to do more than moan, and Father

Anthony suggested that I ought to be well lashed over my neck, shoulders, and bosom, to make me speak out, but the other seeing how exhausted I really was, restrained his mad fury, and then after waiting a little one of them would give me a terrible cut, and ask the other to see the beautiful effects of it as I swayed about in agony; this was done again and again, till after a time the scourges were thrown aside, and the rope being lowered I was allowed to lay on the floor for a little while, and some cordial was again administered to refresh me, my tormentors sitting down and frigging themselves openly before my face, till in the act of spending they would stand over me so that I might be thoroughly humiliated by having all their spendings drop on my face, neck, or head, as I was still secured to the floor by my wrists.

Presently, at a sign from Francisco, his companion hoisted me up by the ancle again, and did it so tightly that I was frightfully stretched by my arms and leg; which were drawn as painfully tight as he could make it, the fastenings cutting into the flesh so that I bear the marks to this very day, I could see that Francisco was again preparing his godemiche with oil, but he did not put any upon my person.

This lasted a little while, then I was made to get up on my hands and knees, facing Francisco, who then opened his frock, so as to show me the excited state of his prick, at the same time, with a malicious look of fiendish joy, he asked me, “If I should not like to suck such a delightful sweetmeat. We spent the night together at his hotel, although scarcely fourteen days since I was so fearfully outraged, how we fucked all night, and swam in sensual pleasures for hours, I would deny him nothing, was he not my champion, who was going to risk his life in the morning to avenge my fearful wrongs, and to make him still more earnest in his desire for vengeance, I stripped naked, let him examine every part, where the marks of the bruises and lacerations were still visible; my cun
Report copyright / DMCA form

Read The Convent School; Or, Early Experiences of a Young Flagellant pdf free

See also
The Jungle Book
The Radio Amateur's Hand Book
Every Boy's Book: A Complete Encyclopædia of Sports and Amusements
The Iliad