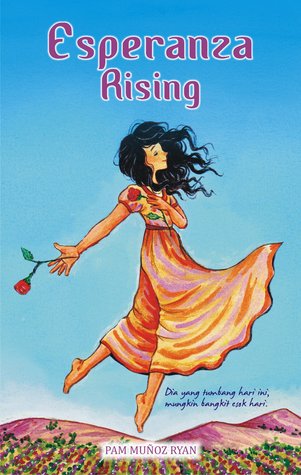 Esperanza Rising is a young adult historical fiction novel written by Mexican-American author Pam Muñoz Ryan and released by Scholastic Publishing on 27 March 2000. The novel focuses on Esperanza, the only daughter of wealthy Mexican parents, and follows the events that occur after her father's murder. Esperanza, her mother, and their former household servants flee to California with no money during the Great Depression, where they find agricultural work that pays very little. The book received generally positive reviews from critics, who praised Muñoz Ryan's writing and concluded that it was suitable for classroom discussion.
Report copyright / DMCA form

See also
I Am Not Your Perfect Mexican Daughter
For Esme—With Love and Squalor, and Other Stories
The Lost Hero (The Heroes of Olympus, Book 1)
Red Rising