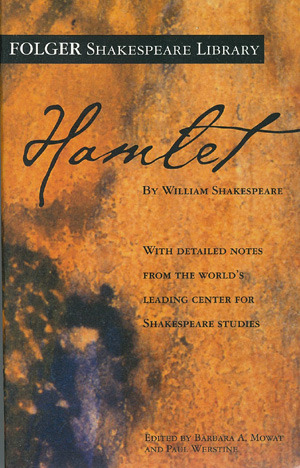 The Tragedy of Hamlet, Prince of Denmark, often shortened to Hamlet (/ˈhæmlɪt/), is a tragedy written by William Shakespeare sometime between 1599 and 1601. It is Shakespeare's longest play, with 29,551 words. Set in Denmark, the play depicts Prince Hamlet and his revenge against his uncle, Claudius, who has murdered Hamlet's father in order to seize his throne and marry Hamlet's mother.

Hamlet is considered among the "most powerful and influential tragedies in the English language", with a story capable of "seemingly endless retelling and adaptation by others".

There are many works that have been pointed to as possible sources for Shakespeare's play—from ancient Greek tragedies to Elizabethan plays. The editors of the Arden Shakespeare question the idea of "source hunting", pointing out that it presupposes that authors always require ideas from other works for their own, and suggests that no author can have an original idea or be an originator. When Shakespeare wrote there were many stories about sons avenging the murder of their fathers, and many about clever avenging sons pretending to be foolish in order to outsmart their foes. This would include the story of the ancient Roman, Lucius Junius Brutus, which Shakespeare apparently knew, as well as the story of Amleth, which was preserved in Latin by 13th-century chronicler Saxo Grammaticus in his Gesta Danorum, and printed in Paris in 1514. The Amleth story was subsequently adapted and then published in French in 1570 by the 16th-century scholar François de Belleforest. It has a number of plot elements and major characters in common with Shakespeare's Hamlet, and lacks others that are found in Shakespeare. Belleforest's story was first published in English in 1608, after Hamlet had been written, though it's possible that Shakespeare had encountered it in the French language version.
Report copyright / DMCA form