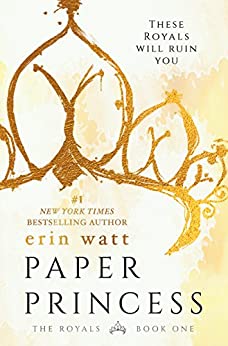 From strip clubs and truck stops to southern coast mansions and prep schools, one girl tries to stay true to herself.

These Royals will ruin you…

Ella Harper is a survivor—a pragmatic optimist. She’s spent her whole life moving from town to town with her flighty mother, struggling to make ends meet and believing that someday she’ll climb out of the gutter. After her mother’s death, Ella is truly alone.

Until Callum Royal appears, plucking Ella out of poverty and tossing her into his posh mansion among his five sons who all hate her. Each Royal boy is more magnetic than the last, but none as captivating as Reed Royal, the boy who is determined to send her back to the slums she came from.

Reed doesn’t want her. He says she doesn’t belong with the Royals.

Wealth. Excess. Deception. It’s like nothing Ella has ever experienced, and if she’s going to survive her time in the Royal palace, she’ll need to learn to issue her own Royal decrees.

QUESTIONS ABOUT THE BOOK

We recommend this for young adult readers, age 17 and up. We think it’s a book that will appeal to older teens and those adults who are in touch with their inner teen, like us.

We promise that we didn’t set out to write a cliffhanger, but Paper Princess does end in one. The good news is that the next book is up for pre-sale and it will be released July 25, 2016.

Erin Watt is the brainchild of two bestselling authors linked together through their love of great books and an addiction to writing. They share one creative imagination. Their greatest love (after their families and pets, of course)? Coming up with fun--and sometimes crazy--ideas. Their greatest fear? Breaking up. You can contact them at their shared inbox: [email protected]

“Gritty, angsty, steamy, and rife with scandal and secrecy, Paper Princess is the kind of book you hope EVERY book will be when you open it. The kind you can't put down, can't forget about. This book consumed me and thanks to that crazy ending, I won't be moving on from this book for a good long while.” Jessica from Angie & Jessica’s Dreamy Reads
Report copyright / DMCA form