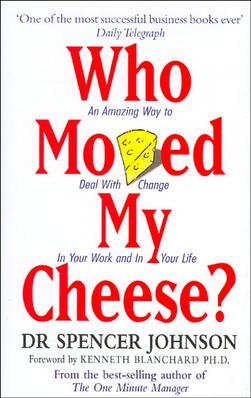 Who Moved My Cheese? An Amazing Way to Deal with Change in Your Work and in Your Life, published on September 8, 1998, is a bestselling seminal work and motivational business fable by Spencer Johnson. The text describes the way one reacts to major change in one's work and life, and four typical reactions to those changes by two mice and two "Littlepeople," during their hunt for "cheese." A New York Times business bestseller upon release, Who Moved My Cheese? remained on the list for almost five years and spent over 200 weeks on Publishers Weekly's hardcover nonfiction list. As of 2018, it has sold almost 30 million copies worldwide in 37 languages and remains one of the best-selling business books.
Report copyright / DMCA form

See also
Fallout: The Vault Dweller’s Official Cookbook
To Sell Is Human
The business of the 21st century
Children of Blood and Bone