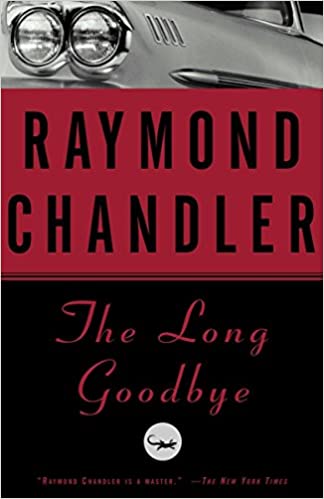 Private investigator Philip Marlowe is 42 years old and does not exercise. His sport is chess yet he does not play against anybody. He just replays games of chess masters and solves chess puzzles. His brushes with danger and death he just narrates matter-of-factly. In one scene a rich, powerful, mean-spirited guy comes to his office. After some tough guy dialogue Marlowe slugs the visitor which made the latter double up in pain while his bodyguard--certainly armed--is just outside. When Marlowe later meets the bodyguard he insults him on his face. Yet they left Marlowe unharmed.

Marlowe befriends a down on his luck war veteran with the scars to prove it. Then he finds out that Terry Lennox has a very wealthy nymphomaniac wife, who he's divorced and re-married and who ends up dead. and now Lennox is on the lam and the cops and a crazy gangster are after Marlowe.


Due to his straitened financial circumstances during the Great Depression, Chandler turned to his latent writing talent to earn a living, teaching himself to write pulp fiction by studying the Perry Mason story formula of Erle Stanley Gardner. Chandler's first professional work, "Blackmailers Don't Shoot", was published in Black Mask magazine in 1933; his first novel, The Big Sleep, was published in 1939, featuring his famous Philip Marlowe detective character speaking in the first person.

In 1950, Chandler described in a letter to his English publisher, Hamish Hamilton, why he began reading pulp magazines and later wrote for them:

Wandering up and down the Pacific Coast in an automobile I began to read pulp magazines, because they were cheap enough to throw away and because I never had at any time any taste for the kind of thing which is known as women's magazines. This was in the great days of the Black Mask (if I may call them great days) and it struck me that some of the writing was pretty forceful and honest, even though it had its crude aspect. I decided that this might be a good way to try to learn to write fiction and get paid a small amount of money at the same time. I spent five months over an 18,000 word novelette and sold it for $180. After that I never looked back, although I...