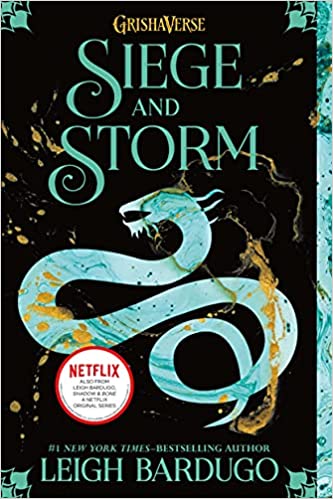 The second book in The Grisha Trilogy by the #1 New York Times bestselling author of Six of Crows and Crooked Kingdom.

Hunted across the True Sea, haunted by the lives she took on the Fold, Alina must try to make a life with Mal in an unfamiliar land, all while keeping her identity as the Sun Summoner a secret. But she can't outrun her past or her destiny for long.

The Darkling has emerged from the Shadow Fold with a terrifying new power and a dangerous plan that will test the very boundaries of the natural world. With the help of a notorious privateer, Alina returns to the country she abandoned, determined to fight the forces gathering against Ravka. But as her power grows, Alina slips deeper into the Darkling's game of forbidden magic, and farther away from Mal. Somehow, she will have to choose between her country, her power, and the love she always thought would guide her--or risk losing everything to the oncoming storm.

Siege and Storm is the second book in The Grisha Trilogy by Leigh Bardugo. Book one, Shadow and Bone, is a New York Times bestseller, and book 3, Ruin and Rising, is an Amazon Best Book of the Year and a USA Today bestseller. This title has Common Core connections, and this deluxe paperback edition features bonus materials like an interview with Leigh Bardugo, a bonus short story, "The Tailor," and more.

Praise for the Grisha Trilogy:

"A heady blend of fantasy, romance, and adventure." ―Rick Riordan, bestselling author of the Percy Jackson & the Olympians series, on Siege and Storm

"This is what fantasy is for." ―The New York Times Book Review on Shadow and Bone

"An action-packed, heartbreaking ending will leave [readers] breathless for the final installment." ―School Library Journal on Siege and Storm