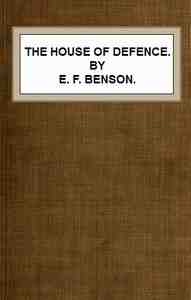 Maud was lying in a long chair on the lawn after lunch the following afternoon, defending Christian Science from the gibes (which were keen) of the mockers, who were many. She had an ally, it is true, in the person of Alice Yardly, who, in her big hat and white dress, with a blue sash, looked like a doubtful Romney, and was smiling, literally with all her might. The more the mockers mocked, the kinder grew her smile, and the more voluble her explanations. Maud, for her part, would sooner have done battle alone, for all that Alice as an ally did was, with great precision and copious directions, to reveal to the enemy all the weak points in the fortifications (of which, it seemed to Maud, there were hundreds) and all the angles where an assault would probably meet with success. Wherever, so it seemed, there was any possible difficulty in "the scheme of things entire," as understood by Christian scientists, there was poor dear Alice, waving a large and cheerful flag to call attention to it.
Report copyright / DMCA form