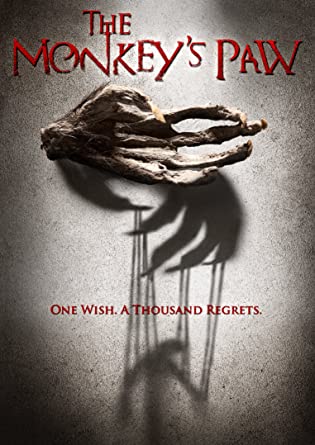 The short story involves Mr. and Mrs. White and their adult son, Herbert. Sergeant-Major Morris, a friend who served with the British Army in India, comes by for dinner and introduces them to a mummified monkey's paw. An old fakir placed a spell on the paw, so that it would grant three wishes but only with hellish consequences as punishment for tampering with fate. Morris, having had a horrible experience using the paw, throws it into the fire, but the sceptical Mr. White retrieves it. Before leaving, Morris warns Mr. White of what might happen should he use the paw.

Mr. White hesitates at first, believing that he already has everything he wants. At Herbert's suggestion, Mr. White flippantly wishes for £200, which will enable him to make the final mortgage payment for his house. When he makes his wish, Mr. White suddenly drops the paw in surprise, claiming that it moved and twisted like a snake. The following night, an employee arrives at the Whites' home, telling them that Herbert had been killed in a terrible machine accident that mutilated his body. The company denies any responsibility for the incident, but makes a goodwill payment of £200, the amount that Mr. White had wished for.

A week after the funeral, Mrs. White, mad with grief, insists that her husband use the paw to wish Herbert back to life. Reluctantly, he does so, despite great unease at the thought of summoning his son's mutilated and decomposing body. An hour or so later, there is a knock at the door. As Mrs. White fumbles at the locks in a desperate attempt to open the door, Mr. White becomes terrified and fears that the thing outside is not the son he loved. He makes his third and final wish. The knocking stops, and Mrs. White opens the door to find that no one is there.
Report copyright / DMCA form