Strive and Succeed; or, The Progress of Walter Conrad [PDF] [EPUB] [FB2] Free 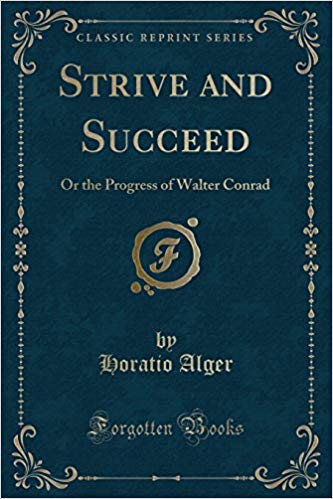 In the late 1800's, Horatio Alger's books were eagerly devoured by thousands of boys who, like his heroes, aspired to make something of themselves in life.

His values, and the values of his era, were simple ones of basic decency, hard work, and optimism. In "Strive and Succeed", we follow the continuing story of Walter Conrad (introduced in "Slow and Steady"), as he attempts to regain his inheritance, swindled out of him by unscrupulous mine operators.

Excerpt:
“You look very comfortable here, Mr. Barclay,” said Walter.
“Yes, I have made the room pleasant. The books and pictures I brought with me, and the armchair I bought in the village. I am sensitive to cold, and so I have a fire lighted just before I come home in the afternoon.”
“Have you any scholars in Latin?” asked Walter, seeing a copy of “Caesar’s Commentaries” on the table.
“One—John Wall, the son of General Wall, the most prominent man in Portville.”
“I have already made the young gentleman's acquaintance,” said Walter, smiling.
“Indeed!” returned Allen Barclay, in surprise.
“I met him in the stage. I don't think we were either of us very favorably impressed with the other.”
Here he gave a brief account of the altercation between himself and John.
“What you say does not surprise me,” said the teacher. “John is a thoroughly selfish, disagreeable boy, with a very lofty idea of himself and his position as the son of a rich man. He considers himself entitled to the best of everything. I am glad you did not give way to him.”
“I am too independent for that,” answered Walter. “I don't allow myself to be imposed upon if I can help it, though I hope I am not often disobliging.”
“You had no call to yield to him today.”
“So I thought. What sort of a scholar is he?”
“John Wall? Very poor. He will never set the river on fire with his learning or talents. In fact, if he were a better scholar, I might feel different about teaching him. I have only had an academy education, and have not been beyond Caesar myself. However, I have no trouble in keeping ahead of John.”
Here Mr. Barclay was seized with a violent attack of coughing, which seemed to distress him.
“I don't think I shall be able to keep on teaching,” he said, when the fit was over. “If I could only find someone to take my place as teacher, I would leave at once. It is the middle of the term, and I don't want the school closed.”
An idea came to Walter. He was a good English scholar—had been as far in Latin as his companion—and was probably qualified to teach any scholars he was likely to have. It was desirable that he should have something to do, which would serve as a good excuse for remaining in Portville. Why should he not offer to supply Barclay's place, since he thought it necessary to resign?

Read Strive and Succeed; or, The Progress of Walter Conrad pdf free


See also
Every Boy's Book: A Complete Encyclopædia of Sports and Amusements
The Woman in White
The Wonderful Wizard of Oz
Heart of Darkness