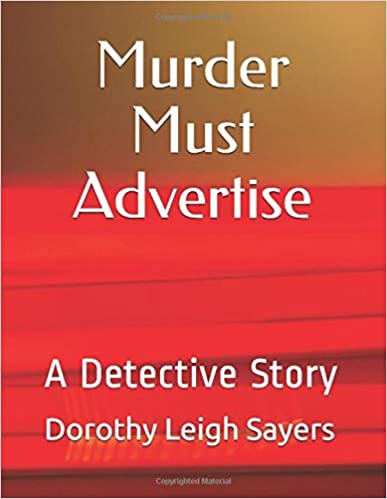 When executive Victor Dean dies from a fall down the iron staircase at Pym's Publicity, a posh London ad agency, Lord Peter Wimsey goes undercover to investigate. Before his tragic demise, the victim had tried to warn Mr. Pym, the firm's owner, about some scandalous behavior involving his employees.

Posing as a new copywriter, Wimsey discovers that Dean was part of an unsavory crowd at Pym's whose recreational habits link them to the criminal underworld. With time running out and the body count rising, Wimsey must rush to find the truth before his identity is discovered and a determined killer strikes again.

Dorothy L. Sayers (1893-1957) was an English writer and playwright. She is best known for her crime fiction but also for her popular plays. Born in Oxford to a family involved in education, she excelled as a student herself and graduated with honours. Eschewing the academic life she moved to London in 1922 where she worked for a book publisher as a copywriter.

She published her first book in 1923, Whose Body, which featured one of her favorite literary characters - amateur detective Lord Peter Wimsey. Many of her books were based on this character and her carefully researched plots proved very popular with her fans. In 1935 she wrote, Gaudy Night, which culminated the career of Wimsey and proved to be one her most popular novels. It was at this time that a friend persuaded her to adapt the novel as a play called Busman's Honeymoon. Her success with the endeavour led her to start writing plays and she produced eight more in the next 15 years. She also developed an interest in ancient Italian literature and translated Dante's Divine Comedy accompanied by clear and concise annotation. Unfortunately her writing career was cut short unexpectedly in 1957 when she died of a sudden heart attack. (Dorothy L Sayers Society)
Report copyright / DMCA form