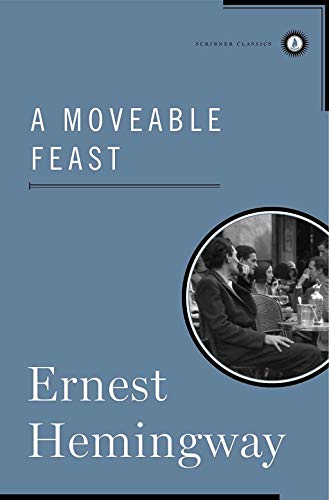 Product Description
Published posthumously in 1964, A Moveable Feast remains one of Ernest Hemingway's most beloved works. Since Hemingway's personal papers were released in 1979, scholars have examined and debated the changes made to the text before publication. Now this new special restored edition presents the original manuscript as the author prepared it to be published.

Featuring a personal foreword by Patrick Hemingway, Ernest's sole surviving son, and an introduction by the editor and grandson of the author, Seán Hemingway, this new edition also includes a number of unfinished, never-before-published Paris sketches revealing experiences that Hemingway had with his son Jack and his first wife, Hadley. Also included are irreverent portraits of other luminaries, such as F. Scott Fitzgerald and Ford Madox Ford, and insightful recollections of his own early experiments with his craft.

Sure to excite critics and readers alike, the restored edition of A Moveable Feast brilliantly evokes the exuberant mood of Paris after World War I and the unbridled creativity and enthusiasm that Hemingway himself experienced. In the world of letters it is a unique insight into a great literary generation, by one of the best American writers of the twentieth century.

Review
The Paris sketches are absolutely controlled, far enough removed in time so that the scenes and characters are observed in tranquillity, and yet with astonishing immediacy - his remarkable gift - so that many have the hard brilliance of his best fiction, New York Herald Tribune

The first thing to say about the 'restored' edition so ably and attractively produced by Patrick and Sean Hemingway is that it does live up to its billing . . . well worth having, Christopher Hitchens, "The Atlantic"

About the Author
Ernest Hemingway was born in 1899. His father was a doctor and he was the second of six children. Their home was at Oak Park, a Chicago suburb.

In 1917, Hemingway joined the Kansas City Star as a cub reporter. The following year, he volunteered as an ambulance driver on the Italian front, where he was badly wounded but decorated for his services. He returned to America in 1919, and married in 1921. In 1922, he reported on the Greco-Turkish war before resigning from journalism to devote himself to fiction. He settled in Paris where he renewed his earlier friendships with such fellow-American expatriates as Ezra Pound and Gertrude Stein. Their encouragement and criticism were to play a valuable part in the formation of his style.

Hemingway's first two published works were Three Stories and Ten Poems and In Our Time but it was the satirical novel, The Torrents of Spring, that established his name more widely. His international reputation was firmly secured by his next three books; Fiesta, Men Without Women and A Farewell to Arms.

He was passionately involved with bullfighting, big-game hunting and deep-sea fishing and his writing reflected this. He visited Spain during the Civil War and described his experiences in the bestseller, For Whom the Bell Tolls.

His direct and deceptively simple style of writing spawned generations of imitators but no equals. Recognition of his position in contemporary literature came in 1954 when he was awarded the Nobel Prize for Literature, following the publication of The Old Man and the Sea. He died in 1961.
Report copyright / DMCA form