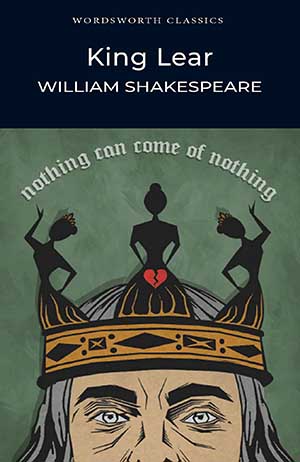 King Lear is a tragedy written by William Shakespeare. It is based on the mythological Leir of Britain. King Lear, in preparation for his old age, divides his power and land between two of his daughters. He becomes destitute and insane and a proscribed crux of political machinations. The first known performance of any version of Shakespeare's play was on Saint Stephen's Day in 1606. The three extant publications from which modern editors derive their texts are the 1608 quarto (Q1) and the 1619 quarto (Q2, unofficial and based on Q1) and the 1623 First Folio. The quarto versions differ significantly from the folio version.

The play was often revised after the English Restoration for audiences who disliked its dark and depressing tone, but since the 19th century Shakespeare's original play has been regarded as one of his supreme achievements.

Both the title role and the supporting roles have been coveted by accomplished actors, and the play has been widely adapted. In his Defense of Poetry, Percy Bysshe Shelley called King Lear "the most perfect specimen of the dramatic art existing in the world", and the play regularly appears on lists of the greatest works of literature ever written.
Report copyright / DMCA form