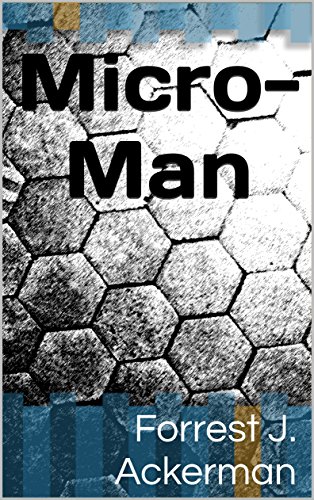 Something moving on the ledge attracted my attention: it was a scurrying black ant. If I had thought about it, I might have wondered how it came there. But the next moment a more curious object on the sill caught my eye. I bent over.

I couldn't make out what it was at first. A bug, perhaps. Maybe it was too small for a bug. Just a little dancing dust, no doubt.

Then I discerned -- and gasped. On the sill, there -- it was a man! A man on the streetcar's window sill -- a little man! He was so tiny I would never have seen him if it hadn't been for his white attire, which made him visible against the brown grain of the shellacked wood. I watched, amazed as his microscopic figure moved over perhaps half an inch.

He wore a blouse and shorts, it seemed, and sandals. Something might have been hanging at his side, but it was too small for me to make out plainly. His head, I thought was silver-colored, and I think the headgear had some sort of knobs on it. All this, of course, I didn't catch at the time, because my heart was hammering away excitedly and making my fingers shake as I fumbled for a matchbox in my pocket, I pushed it open and let the matches scatter out.
Report copyright / DMCA form

See also
Strive and Succeed; or, The Progress of Walter Conrad
The Funny Side of Physic
Alice in Wonderland
The Black Arrow