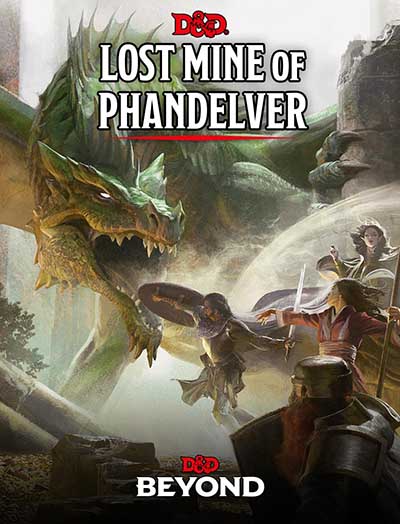 Lost Mines of Phandelver Pdf is made in the light format and readable scan for fans of this adventure & game story. There are 64 pages that tell the story of adventure and how to play the game.

Part 1: Goblin Arrows
The adventurers are on the road to the town of Phandalin when they stumble into a goblin ambush. They discover that the goblins (who belong to the Cragmaw tribe) have captured their dwarf friend Gundren Rockseeker and his escort, a human warrior named Sildar Hallwinter. The characters must deal with the ambushers and then follow their trail back to the goblins’ hideout. They rescue Sildar and learn from him that Gundren and his brothers discovered a famous lost mine. Sildar knows only that Gundren and his map have been taken to somewhere called “Cragmaw Castle”.

The characters arrive in Phandalin to find it terrorized by the Redbrands, a gang of miscreants led by a mysterious figure called Glasstaff. A number of interesting NPCs can also be found in Phandalin, laying the hooks for short adventures in part 3. The Redbrands try to run the characters out of town, so the characters return the favor and storm the Redbrandlair. In a hidden stronghold beneath an old manor, they find that Iarno “Glasstaff” Albrek, the leader of the Redbrands, is taking his orders from someone called the Black Spider and that the Black Spider wants the adventurers out of the picture.

Provides the characters with several short adventures in the region around Phandalin as they search for more information about the Black Spider and the dwarves’ lost mine. The clues the characters picked up in Phandalin can lead them to spy on a mysterious wizard at the ruins of Old Owl Well, seek the advice of a dangerous banshee, oust a band of ores lurking at Wyvern Tor, and investigate the ruins of the town of Thundertree. Several of these leads point to Cragmaw Castle, which is the stronghold of King Grol, leader of the Cragmaw goblins. Here the characters discover that the Black Spider is a drow adventurer named Nezznar, and that the Cragmaw goblins work for him (drow are elves who hail from a realm deep underground). More importantly, they recover Gundren Rockseeker’s map to the lost mine, or learn the mine’s location from one of the other leads they unearth during part 3.

That lost underground complex is now overrun by undead and strange monsters. Nezznar the Black Spider is there with his loyal followers, exploring the mines and searching for the legendary Forge of Spells. The adventurers have the opportunity to avenge Gundren Rockseeker, to ensure the prosperity and security of Phandalin by clearing the rich mine of its monsters, and to put an end to the troublemaking of the Black Spider—if they can survive the dangers of the Lost Mine of Phandelver. Wreckage of a technological civilization. Most D&D settings are somewhere between those two extremes: worlds of medieval high fantasy with knights and castles, as well as elven cities, dwarven mines, and fearsome monsters. The world of the Forgotten Realms is one such setting, and that’s where the story in this adventure takes place. In the Realms, knights dare the crypts of the fallen dwarf kings of Delzoun, seeking glory and treasure. Rogues prowl the dark alleyways of teeming cities such as Neverwinter and Baldur’s Gate. Clerics in the service of gods wield mace and spell, questing against the terrifying powers that threaten the land. Wizards plunder the ruins of the fallen Netherese empire, delving into secrets too dark for the light of day. Dragons, giants, demons, and unimaginable abominations lurk in dungeons, caverns, ruined cities, and the vast wild places of the world. On the roads and rivers of the Realms travel minstrels and peddlers, merchants and guards, soldiers, sailors, and steel-hearted adventurers carrying tales of strange, glorious, faraway places. Good maps and clear trails can take even an inexperienced youth with dreams of glory far across the world. Thousands of restless would-be heroes from backcountry farmsteads and sleepy villages arrive in Neverwinter and the other great cities every year in search of wealth and renown. Known roads may be well traveled, but they aren’t necessarily safe. Fell magic, deadly monsters, and cruel local rulers are all perils that you face when you travel in the Forgotten Realms. Even farms and freeholds within a day’s walk of a city can fall prey to monsters, and no place is safe from the sudden wrath of a dragon. The regional map shows just a tiny part of this vast world, in a region called the Sword Coast. This is a region of adventure, where daring souls delve into the wreckage of ancient strongholds and explore ruins of long-lost cultures. Amid a wilderness of jagged, snow-capped peaks, alpine forests, lawlessness, and monsters, the coast holds the greatest bastions of civilization, including the coastal city of Neverwinter.
Report copyright / DMCA form

See also
The Lost Hero (The Heroes of Olympus, Book 1)
Lost in the Future
The Game of Rat and Dragon
Lost Mine Trail