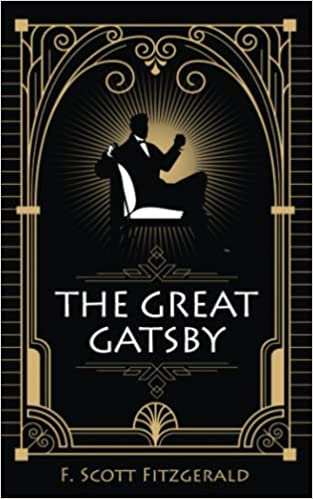 The novel was inspired by a youthful romance Fitzgerald had with socialite Ginevra King, and the riotous parties he attended on Long Island's North Shore in 1922.
Following a move to the French Riviera, Fitzgerald completed a rough draft of the novel in 1924. He submitted it to editor Maxwell Perkins, who persuaded Fitzgerald to revise the work over the following winter. After making revisions, Fitzgerald was satisfied with the text, but remained ambivalent about the book's title and considered several alternatives. Painter Francis Cugat's cover art greatly impressed Fitzgerald, and he incorporated aspects of it into the novel.

After its publication by Scribner's in April 1925, The Great Gatsby received generally favorable reviews, though some literary critics believed it did not equal Fitzgerald's previous efforts. Compared to his earlier novels, Gatsby was a commercial disappointment, selling fewer than 20,000 copies by October, and Fitzgerald's hopes of a monetary windfall from the novel were unrealized. When the author died in 1940, he believed himself to be a failure and his work forgotten.

During World War II, the novel experienced an abrupt surge in popularity when the Council on Books in Wartime distributed free copies to American soldiers serving overseas. This new-found popularity launched a critical and scholarly re-examination, and the work soon became a core part of most American high school curricula and a part of American popular culture. Numerous stage and film adaptations followed in the subsequent decades.

Gatsby continues to attract popular and scholarly attention. Contemporary scholars emphasize the novel's treatment of social class, inherited versus self-made wealth, race, and environmentalism, and its cynical attitude towards the American dream. One persistent item of criticism is an allegation of antisemitic stereotyping. The Great Gatsby is widely considered to be a literary masterwork and a contender for the title of the Great American Novel.
Report copyright / DMCA form